Turning your passion into a career

Turning your passion into a career

For Laura Mabee, a Bachelor of Arts in History was not the end of her postsecondary journey, just the beginning. “I chose web development because I enjoyed it as a side hobby, so I decided to take my passion and turn it into a profession,” says Mabee.

After some careful research, Mabee decided Humber’s one-year, postgraduate Web Development certificate would offer her the skills she needed to merge her passion with a career.

And, at the end of year portfolio show, Mabee was proudly displaying her collection of work from the past year, with the confidence of her upcoming internship already in place.

“I came into this program not knowing a lot of code and working in the museum environment. The web development program is giving me an opportunity to do an internship at the Royal Ontario Museum (ROM), where I’ll be working on the museum's end coding. Humber’s program has bridged the connection between what I’m passionate about and like to do, and has combined it with the most perfect internship,” says Mabee.

Students are taught HMTL and CSS along with various other programs, how to work with databases and create complex databases for websites, along with the business of web development and how to work in teams.

“Classes are a combination of lectures and hands on projects that commence as soon as the program starts in September. Students are given a project right away that simulates a real client’s demands and have to come up with the requirements and a plan. We even make students start filling out time sheets, working it into their professional practice right from the first day,” says Bernie Monette, program co-ordinator, Web Development program.

Monette stresses that while various backgrounds, not just computer programmers are candidates for the program; the most important skill is lifelong learning, as they will be working in an ever changing environment.
Posted by Humber World at 12:14 PM No comments: Not everyone has the opportunity to visit the Great Wall of China and hike through a rice terrace, but 20 graduating Humber Creative Photography diploma students did.

Spearheaded by professor Neil Fox and accompanied by photography technician, Chantal Denne, Humber students participated in an adventure of a lifetime. The 18 day excursion took them off the typical tourist path, hiking and kayaking in the heart of the country. The photographs documenting the trip became part of the 2012 Contact Photography Festival, Made in China exhibit.

“At one point we stopped in a small village and handed out 20 point and shoot cameras to a small group of schools kids. Each child was paired up with a Humber student and learned how to use the camera. It was a great experience,” says Denne.

While the exhibition took place a year after the trip, it gave graduates an opportunity to reunite and reminisce about the worldly adventure.

“There were so many great photographic moments, but sleeping on the Great Wall of China and getting shots of the sunset and sunrise is something that I’ll never forget,” says Denne.

Posted by Humber World at 3:58 PM No comments: 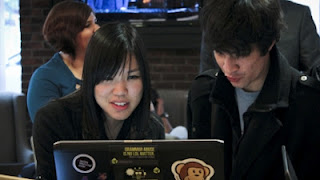 Who’s coming out of Humber’s two-year Multimedia Design and Production Technician diploma program? A group of highly skilled, diverse and talented grads, up to date on industry trends and cutting-edge technology.

This year’s portfolio showcase at the INGDirect Café in downtown Toronto was a way for 30 graduating students to present their online portfolios to industry professionals, recruiters, family and Humber staff.

“When industry is saying we’re producing a high quantity of well-rounded grads, that’s pretty exciting," says Linda Nakanishi, professor, School of Media Studies and Information Technology. “I think the draw for interactive is that it’s always changing and Humber is really good at adapting the program. Every year things change, expectations change, technology changes, trends change in design, and we have to revamp and keep things current at Humber.”


The theme for this year’s show was ‘Elements’ and the graduates worked on the marketing, branding, web and print promotion, with the students having a say in every step of the process.

In addition to showcasing the student’s work, the show was also a one on one networking opportunity with industry representatives and recruiters, allowing students to fine-tune their communication skills.

JeJun Lee, a graduating student was encouraged by his professors to enter his design into the FITC (Future. Innovation. Technology. Creativity.) Awards competition, which honours the best of the best in the new media industry. Lee did so and won a Best Canadian Student website award. He was also hired full-time, prior to finishing his school internship.

Posted by Humber World at 12:45 PM No comments: 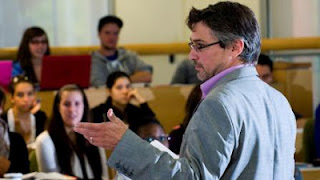 Humber College’s Bachelor of Applied Business – International Business degree can take students around the world. For Bianca Khomasurya, her internship took her to a printing company in Indonesia.

“I worked directly with the manager of the printing company on many logistical jobs,” the fourth-year student says. “Sitting in on meetings with clients was especially interesting because I learned different sales and marketing strategies.”

Khomasurya, pictured at right, wanted to see how business is different outside of Canada.

“I learned the business culture in Indonesia is very different,” she says. “There is more of a focus on final results than there is on process. Working abroad gave me useful information as I decide what to do after I graduate.”

“Students learn about international aspects of banking, finance, logistics, marketing and also cross-cultural communications,” says Gendron. “They gain practical skills through projects such as creating a comprehensive strategic plan to launch a business into an international market.”

Khomasurya, an Etobicoke resident, came to Humber after one year of university in Ottawa. Humber appealed to her in part for the location and attractive Lakeshore Campus, but also because the program promised to teach her international business theory and offered a paid internship.

“Many jobs require having a degree and work experience, which is why I picked Humber,” she says. “When companies look at my resumé, they will see that I have the knowledge and experience to contribute right away.”

Posted by Humber World at 2:44 PM No comments: 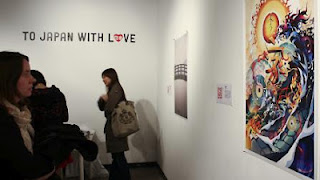 Humber graphic design faculty, students and alumni used their talents to support Japan at a special event in downtown Toronto.

Humber Multimedia Design Production Technician instructor Linda Nakanishi organized To Japan With Love, an event where designers showcased their abilities by creating Japan-themed designs for posters and art cards. Hundreds of people attended and gave donations, as well as purchasing posters and art cards. The event raised more than $3,200 after expenses, which will be donated to the Canadian Red Cross.

The March 11, 2011 earthquake that rocked northern Japan, and the subsequent tsunami, killed more than 15,000 people and left thousands more injured or missing. Thousands of homes and other buildings were destroyed, and a potential nuclear emergency continues to threaten the area.

“After the earthquake, I donated to Japan, but felt like we should do something more,” said Nakanishi, who has family and friends in Japan, but none in the affected areas. “I contacted some of our students and graduates who were looking for ways to support Japan. So many graphic design people in Toronto come from Humber, we’re a bit of a community. We decided to do this show a few weeks ago; it’s been hectic the last few days, but we’re really happy with the results.”


Nick La, a well-known graphics designer and a graduate of Humber, was one of the people Nakanishi contacted. He had started thinking about what he could do to support Japan as soon as he heard the news.

“It really hit me emotionally, and I wanted to do something to help them, to help people and express my feelings,” he said.

For Yuko Itakura, who grew up in Japan before coming to Humber to study graphic design, the cause is especially meaningful. She designed her poster as a way to communicate to people what needs to be done to support Japan. Her brother, who lives in Tokyo, told her of the struggles people there were having with necessities such as bottled water, toiletries and electricity.

“Japan is my country.  I was born in Japan, so I really love Japan,” said Itakura.

Nakanishi is hopeful that people will continue to support Japan.

“I created a web site called ToJapanWithLove.ca, and it’s going to grow as a place to go to buy art to support this cause, so it will continue,” she said.

Visit ToJapanWithLove.ca to purchase art, see the designs and learn more about the designers.
Posted by Humber World at 2:44 PM No comments: 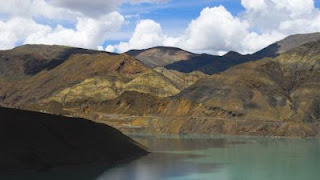 For someone who describes their occupation as an administrator who works “down in one of the bureaucratic areas” of Humber, Michael Hatton can list off a number of impressive destinations that he’s been fortunate enough to visit.
Hatton, vice-president, Academic, is sharing his experiences at the University of Guelph-Humber Art Gallery with Faces & Spaces, a collection of photographs that spans nearly four decades.
“I started to get involved in international work with Humber and I found the opportunity to travel around the world to countries that most people dream about,” said Hatton. “I always carried the camera along.”
As the exhibit title suggests, Hatton’s canvas-printed photography focuses primarily on portraits of individuals he’s encountered on his travels and the colourful landscapes where they reside.


“Most of what you’ll see in the exhibit is from Tibet and Indonesia,” said Hatton, although the collection also showcases images taken in Ontario and Newfoundland.

When asked about his inspiration, Hatton admits that he’s not certain what sparks his creative side when he’s behind the lens.

“I am very much a person of the moment when it comes to photography.”

Posted by Humber World at 10:46 AM No comments: