Baneen Fatima - “Zombies and I: NOT a Love Story”

By Baneen Fatima
This article originally appeared on i-StudentGlobal on 13th November 2014. 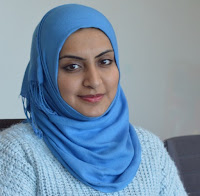 Some people are easily scared; others are just good at pretending things don't affect them. Being scared is never something one enjoys. I’m not talking about being scared of roller coasters or sky diving, because most people enjoy those when they eventually go for it. No, I am talking about something that you might be genuinely afraid of. Something you can't overcome. For some people it is the scare of losing their job or inheritance. For others, it can be failing their class or not being good enough for their life's goal.

I am scared too. Mostly scared to lose anyone who I love, but I am also scared of zombies.

Since Halloween I have wanted to share one of my scary experiences. It started when I was working late on one of my school projects...

Since I knew that I would be staying at Humber College later than normal, I had begged my brother to let me borrow his car for the day. Otherwise, I would have had to take two different buses late at night to reach home. He reluctantly agreed, and I managed not to get lost too many times while driving through Toronto to get to school. When I was finally done with work, I got behind the steering wheel, turned my trusty GPS on and hoped that this time I wouldn’t get lost, especially since it was already dark.

I did get a little anxious because I usually don’t like relying on technology too much, especially when I don’t have a backup plan. I am always thinking about scenarios like what I would do if my battery died. People in movies are always killed after they lose their network signal or their battery runs out. I don’t want to end up like them. So I usually have a map, extra cash and water in the car (well I did, back in Dubai…). However, this was my brother’s car. Therefore, I was more agitated than usual.

Anyway, I was driving home and about two or three blocks away from campus, I spotted a police car in front of me. I didn’t really think about it much, other than making sure I was driving under the speed limit (because usually – well, always, I drive too fast). I had my windows rolled down and was enjoying the cool air on my otherwise tired face when I realized the cops had slowed down considerably. Since I am such an impatient person, I decided to change lanes and overtake the cops. Now that I think about it, I sound very daring taking over a police car. Regardless, that is exactly what I did, and the next thing I knew, I heard their weird sirens. I remember reading about what to do in this situation (according to Canadian law, I should pull over to the right – I had to read about this before going for my G1 – one of the tests needed in Ontario in order to get a driver’s license). I pulled over, trying to think where I made a mistake.

They pulled over behind me and I watched them coming over to the car from one of the mirrors. They asked the usual questions, asking for my licence and insurance and registrations of the car. I was nervous throughout but I managed to be rational, understanding that the worst thing that could happen was that they might give me a ticket. After inspecting my documents, they said that the reason that they pulled me over was because there was something wrong with my rear lights. I told them that I would have them looked at by the mechanic and we drew to a conclusion. As I was thanking the officer standing beside my door, he suddenly looked terrified, staring at the passenger seat’s window. I turned around to study what made the officer lose the colour of his face and found myself staring at a decayed and horrifying face.

I let out a shriek but then this weird creepy zombie face started laughing. More strangely, I could hear the officer beside me laughing too. These zombie features belonged to the second officer who wore a mask to scare me. They both asked me if I was okay and I started laughing loudly! I could not believe how silly I was, getting scared that easily. I think this prank was more successful because you would just not expect a couple of strict, law abiding police officers to ever be fun in this manner. They apologised that they scared me (notice that they were very sure that I, in fact, did get scared; there was no possibility of me saving face) and then offered me this big box of chocolates, wishing me a scary Halloween. I gratefully accepted (because who would say ‘no’ to chocolates?) and wished them back.

That night, I was scared and then delighted in a matter of minutes and I feel that that was exhilarating! I learnt something that day though. I learnt that things are only scary when you let them be so. Whether you are worried about your job or about your grades, or whether you are worried about being a good person or about achieving your life’s goal, it will only be scary and troublesome if you let it be. Just like realising that there was an ordinary man behind a hideous mask, you need to know that there is an ordinary hurdle masking itself behind a scarier mask. It is important that we understand this because once we do; jumping over that hurdle and continuing our journeys will be a piece of cake.

Until next time my amigos!

Posted by YourHumberWorld at 9:00 AM