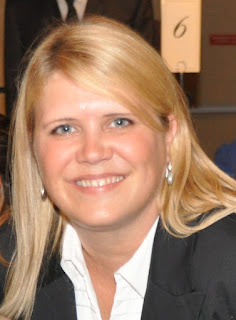 Laurie joined the International Centre team in March 2016, but she has been on the international scene since 2004. “I actually worked for the Ningbo-Jimei Program for 10 years,” Laurie said. She had many roles from faculty staff, program coordinator to program manager.
“I think what brings me to the International Centre is the scene. I just missed being around international students and helping them,” said Laurie. Aside from her professional experience, Laurie has been travelling most of her life; she was just 14 years old when she first traveled to Venezuela. It takes more than 10 fingers to count all the countries she visited throughout her life: “I’ve been to Mexico, Cuba, Dominican Republic, Brazil, Peru, Korea, Guam, Thailand, Laos, El Salavador, Nicaragua, and Costa Rica.”

Fast forward to five years after her first visit abroad, she decided to study for a year in Mexico. “I think Mexico has been a part of me ever since; it definitely shaped me into who I am today and ahora puedo hablar español,” said Bradford which means “now I can speak Spanish.”

Another fun fact is not only that she’s multilingual but also she used to be in a band and toured across the United States. “I started touring in 1994 and went across the States and Canada for the next five years,” she said. When asked if she could play any instruments, “my voice is my Instrument,” she answered. So if you get the chance to hear her sing someday, consider yourself lucky.
After her musical career, Laurie, still craving for more adventures, decided to go to South Korea. She stayed in Seoul and taught English as a second language. Now after more than 16 years of exploring diversity and learning new cultures, Laurie is now available full time to help all Humber International students for advice and Inquiries.
She’s available at Lakeshore campus every Wednesday and the rest of the weekdays at North campus.

Posted by YourHumberWorld at 2:14 PM